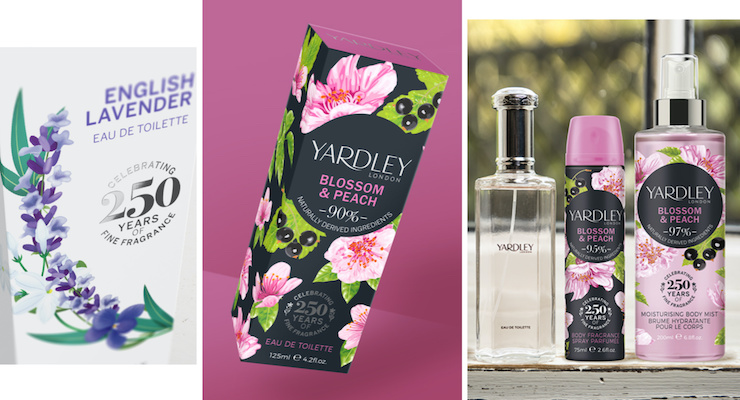 2020 marks 250 years since the House of Yardley was first established and to herald in Yardley’s 250th anniversary Nottingham based brand & packaging specialist Pure was commissioned to redesign the packaging for its Classics fragrance range.

Pure’s creative director David Rogers said, “Yardley boasts a tradition and lineage most perfumery houses can only dream about. It was an honour to be a part of this milestone in the brand’s history.”

As you would expect, Yardley wanted to communicate the anniversary on packs but also challenged Pure to refresh and evolve the design to highlight the “naturalness” of the products.

Five of Pure’s design proposals were put into consumer research including one packaging concept that featured the color black, which challenged the brand’s established look.

Consumer feedback led Yardley to split its approach, repackaging its Traditional Florals range aimed at 50-plus females in line with the current brand approach, but utilizing a black design backdrop to introduce a Contemporary Florals range targeting a younger demographic of 35+ females.

Rogers explained, “Feedback from consumer research indicated that the design that included black, challenged consumers’ perceptions of the Yardley brand with comments such as it feels ‘younger and fresher.’ Yardley then took an opportunity to move the brand forward by launching the Contemporary Florals range.”

The packaging design was previewed earlier this year. At the launch, Yardley also unveiled its new Flowerazzi range also designed by Pure.