The 2021 Perfumed Plume Awards for Fragrance Journalism were presented during a virtual celebration on June 3rd. 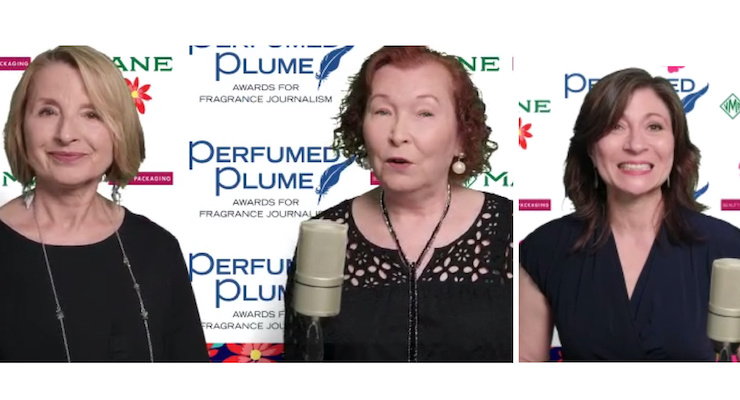 The Perfumed Plume Awards For Fragrance Journalism hosted a virtual awards ceremony on June 3rd to announce its 2021 winners.

Winners were chosen from the Perfumed Plume Finalists, which were announced in April.

The winning stories are all "original, creative, and written in a unique style that succeeds in capturing the consumer's attention," according to Perfumed Plume's co-founders Mary Ellen Lapsansky and Lyn Leigh.

Lapsansky welcomed guests, then Leigh said, "We always strive to maintain the mission of the Perfumed Plume Awards…its ability to engage and educate the consumer on the art and craft of fragrance for creative perfume stories."

Guests worldwide attended the Livestream on Zoom. Winners from Australia, Paris, Berlin, London, California, and New York expressed their joy after hearing their name announced, and thanked committee members for the recognition.

Mane's Gordon began the virtual awards presentation by asking everyone to reveal the fragrance they are wearing and remarked, “I’m wearing about a quart of Pomélo Paradis from Atelier Cologne.”

She continued, "The Perfumed Plume shines a spotlight on gifted writers, whose brilliant storytelling abilities give the consumer a newfound appreciation of fragrance in all its many facets."

During the event, many guests were busy on the Chat, sending the winners congratulatory messages. Networking was also as easy as attending in-person, with Zoom's DM feature.

The online ceremony included a fun look back at five years of awards parties, plus clips of past and pre-recorded video interviews. During one clip, Lapsansky said, "What makes me feel good about the awards is the fact that they’re growing—every year we get submissions from new writers, bloggers, journalists, and magazines… the word is starting to spread—and I think that’s very important.”

Leigh added, “What surprised me the most when we first started, and in subsequent years, is the quality of the writing. That was so humbling to read these amazing perfume stories from writers—these are deep narratives of historical, cultural, and visual references that take readers to another place.”

After the six winning categories were announced, the children’s book, "Zaza’s Scent-sational Super Power," received a special mention. Presenter Mary Manning said, “You can never start early enough to appreciate scent, and so we are hoping to make this a new category—a children’s category—in the coming years."

After the last category was announced, Lapsansky, Leigh, and many of the guests viewing from home raised a glass to toast the winners, who will each receive a sparkling Perfumed Bottle Clock in the mail. "It's a reminder that we can look ahead to next year for an in-person celebration!" Lapsansky commemts.

Who chose the winners? The 2021 judging panel includes two of the presenters named above—Mary Manning and Raymond Matts—along with:


Fragrance Book of the Year


A look at the "InstaPost" winner—