Hermès Beauty Debuts With A $67 Lipstick, Designed by Pierre Hardy

Rouge Hermès is in a refillable metal lipstick case -- and its luxe, modern look is designed by Pierre Hardy, who designs the brand's shoes. 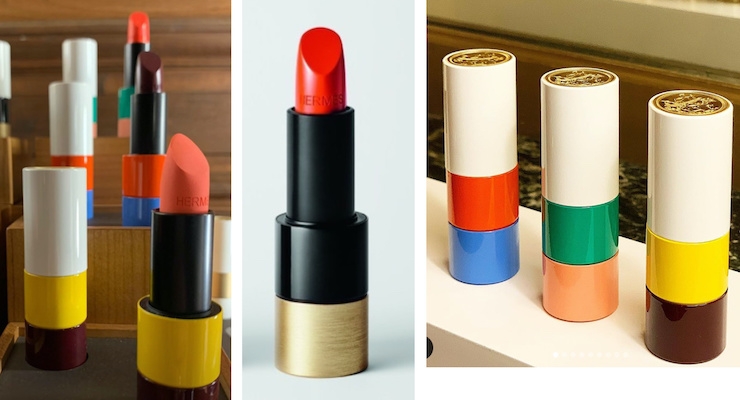 Hermès Beauty is launching its first makeup products on March 4th -- Rouge Hermès, a lipstick collection. The iconic fashion brand has a 180-year-history, and this launch marks its debut in the cosmetics world.

Rouge Hermès includes 24 shades, in honor of the House of Hermès' historic address in Paris at 24 Rue du Faubourg Saint-Honoré. (There is also a fragrance named 24 Faubourg.) The collection includes 10 matte lip colors, and the rest are satin finishes.

The lipstick colors range from reds to oranges and pinks, and were inspired by the brand's fashion archives in Lyon, France. Hermès Beauty creative director Jérôme Touron "referenced more than 900 leathers and 75,000 color samples stored on silks" to create the colors in the collection, reports an article posted yesterday by Harper's Bazaar Singapore.

The lipstick line was formulated in France's Normandy region by the Beauty Research and Development laboratory, according to Harper's Bazaar Sg --  and, the lipstick even has a signature scent custom-blended by Christine Nagel, the nose behind Hermès fragrances. Notes include sandalwood, arnica and angelica.

Wallpaper spoke to Pierre Hardy during an interview at Hermès’ headquarters in Paris. Hardy designed the packaging, which is reminiscent of his signature modern style. It's the designer's first design project for a beauty line, as he has designed shoes and jewelry for Hermès for 30 years, Wallpaper reports.

The refillable metal lipstick cases feature a color block design. The colors on the cases correspond to different leather finishes. The bullet is engraved with "Hermès."

"The resulting tubes are color-block cylinders made of metal that is lacquered, brushed or polished. ‘Metal is an important material at Hermès,’ says Hardy. ‘It is used in harnesses, saddlery, buckles and handbags.’ Each lipstick tube is made of 15 different elements by partner workshops in France and Italy. Refillable, they are meant to be kept as precious objects, like jewels."

The lipstick will retail for $67, with refill bullets priced at $42. Each lipstick comes in a canvas pouch, housed in the brand's signature, iconic orange box.

Hermès Beauty plans to launch a full makeup range by 2023, according to Wallpaper, followed by skincare.

Studio Veronica Ditting posted the launch party invitations, which were designed to match the lipstick packaging.

Follow Harper's Bazaar Singapore inside the launch party in the video below.

Photos above via instagram by spur magazine and on far right, hermestory

Follow us inside the Paris international launch of La Beauté @Hermes. 24 lip colours, lip balm, lip gloss, and a range of luxury accessories, celebrating Hermès quest for the essence of beauty. #HermesBeauty #HarpersBazaarSG