Symposium focuses on the quality and capabilities of Made in Italy and Made in Europe packaging, formulation and machinery suppliers. 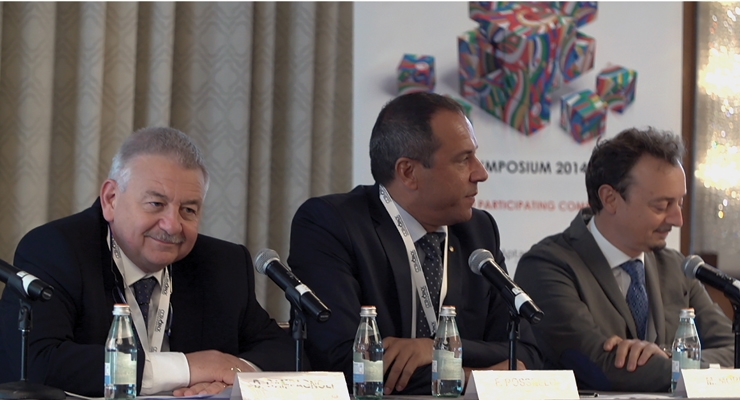 Cosmopack, the show-within-the show of Cosmoprof Bologna, is known as a key destination for cosmetics brands looking for resources and solutions throughout the beauty industry supply chain. Cosmoprof North America, held in Las Vegas, provides North American brands with a wide selection of suppliers, and features a multitude of finished goods for hair, nail and spa. There is also an annual event held in Hong Kong.

Now, the organizer of all the Cosmoprof events, SoGeCos Sp.A., a BolognaFiere Group company, has brought the concept to New York City, with its premiere event designed to target the vibrant East Coast beauty market, and tout the quality and capabilities of Made in Italy and Made in Europe packaging, formulation and machinery suppliers as an important resource.

The Cosmopack Symposium was held September 21-23 at the Trump Soho Hotel, and featured 50 Italian and international suppliers who met with 50 key cosmetics brand buyers in 20-minute individual “speed-dating”-like sessions. More than 240 meetings were held.

The trial event was conceived to “test the waters” for a larger East Coast event, which is now going forward.

Following the event, Duccio Campagnoli, president of BolognaFiere, said, “The Symposium has been a great success, and it confirms to us that it is worth proceeding in the project to build a new Cosmoprof event in the United States, promoting the meeting of the technological capabilities of the Made in Italy and Made in Europe suppliers with the most important American manufacturers. After this success, we are ready to prepare the event that next year will double our presence in the USA next to Cosmoprof North America.”

No formal details have yet been announced.

Campagnoli said 60% of cosmetics are produced in Italy, with $1.5 billion annually in cosmetic exports.

The symposium was attended by Italy’s Minister of the Environment Gian Luca Galletti, who was in New York with the Premier Matteo Renzi at the United Nations Conference on Climate Change. Italian trade organizations Cosmetica Italia and Polo Tecnologico della Cosmesi collaborated on the event.

An ICMAD panel addressed the rules companies must follow in order to export to the American market. Speakers included (L-R): Ian Ginsberg, Pamela Busiek and Sharon Blinkoff.
Several panels took place on September 22, all to provide 200 attendees with inside knowledge of B-B practices, regulations and challenges incurred by U.S.- Italian and European supplier relationships—as well as the advantages.

The New York Symposium opened with the presentation of a Euromonitor International study commissioned by Cosmopack, on “Opportunities for Growth in the North American Market.” David Marguiles, associate consultant at the market research company, spoke about the potential in the U.S. beauty and personal care market, which he said in 2013 accounted for more than $73 billion in sales.

Marguiles said a growth rate of 1.6% is anticipated, resulting in $80 billion

Meetings were arranged between leading beauty industry suppliers and buyers.
annually by 2016. He noted that skincare remains the largest category, but makeup, too, is a strong growth driver. Product multifunctionality is key, said Marguiles, and leads growth.

When it comes to packaging, Marguiles said Euromonitor anticipates that specialty cosmetic containers will increase 1% in share by 2018, with compacts and lipsticks experiencing the most growth, especially in the premium market.

He also noted the importance of the New York vicinity, saying, “The Northeast is the hot spot for beauty brands…and a test market for innovation and new products.” Next, a panel presented by the Independent Cosmetic Manufacturers and Distributors (ICMAD) focused on regulatory updates and what it takes to conduct business in the U.S., and what foreign companies need to know in order to export products into the U.S.

A third roundtable featured leading international beauty brand innovators who shared stories about how they had triumphed in the U.S. and the global marketplace through “blue sky” thinking, and how suppliers could best respond to customers’ needs. All of these CEOs agreed that a combination of packaging, formulation and delivery system is essential for brand success.
Both attendees and suppliers reported that the Symposium had provided a great platform for exchanging ideas and generating international business relationships.
Related Searches