The shoe guru has finally crossed over into beauty with this luxe nail polish collection, in innovative packaging 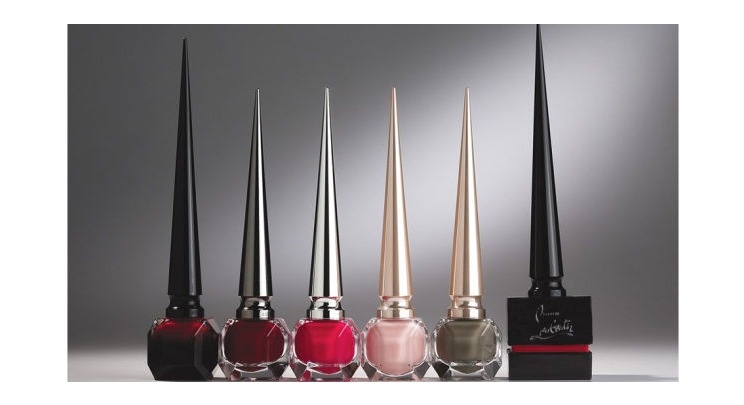 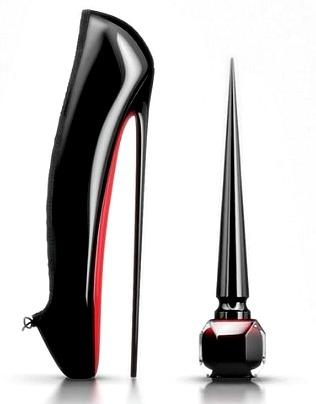 The nail collection has made its debut with just one item, for now – Rouge Louboutin Nail Colour, which is the same red hue that matches Louboutin’s signature soles. 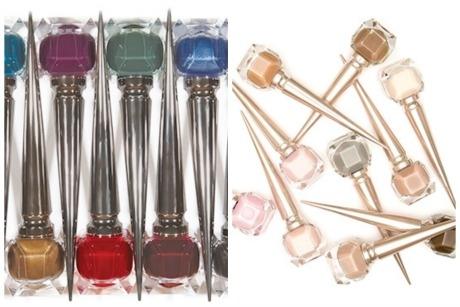 The Noir and Nudes nail color collections. Photo courtesy of Christian Louboutin.
“I wanted to create a link between my shoes and my next adventure. The red sole is the DNA of my brand, if you extract the essence from it, you end up with the color red,” said Louboutin.

Rouge Louboutin Nail Colour launched at Saks Fifth Avenue flagship store on July 23rd, and is featured in the retailer’s window display. It is also sold at the 15 Louboutin boutiques in the U.S. Other retailers, including Sephora, will launch the polish on August 6th.

Louboutin fans will have to wait until August 31st to see the entire nail polish collection hit store shelves, in 30 additional colors. This fall, the collection rolls out on a global scale.

Louboutin says his intention for the package design was to create a true ‘objets d’art’ – and it doesn’t disappoint.

All of the caps in the collection are extra-elongated and extremely slender, with pointy tips – just like a sexy stiletto heel. The look was also inspired by a calligraphy pen. The inside of the caps are red, as a surprise design element, reminiscent of the shoe’s soles. 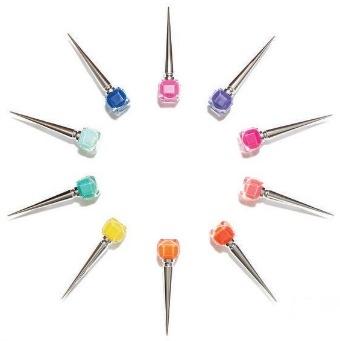 The Pops by Christian Louboutin. Photo courtesy of Christian Louboutin.
Rouge Louboutin’s cap, which is the tallest cap in the nail collection, is an amazing 8 inches high. This cap is inspired by Louboutin’s tallest spiked heel, ‘Ballerina Ultima.’ The innovative design could be a sculpture on display at the MOMA - and even seems to justify the polish’s $50 price tag.

The super glossy formula was developed to mimic the look of patent leather – and it doesn’t contain toluene, formaldehyde, or DBP.

Louboutin wanted to create the effect of a traditional lacquer, such as a varnish painted over wood, which typically uses 20 coats to create the ultra-glossy, protective coating. Loubouitin wanted his polish to achieve the same look in 2 coats, and chose very rich pigments to amplify the color.

In addition to Rouge Louboutin – the iconic, timeless shade of red created to compliment any skin tone, the nail collection includes these three color families:

The weighted glass bottle, which is produced by Pochet, has a faceted design. “The ultimate goal of the nail color was to evoke shiny lacquer imprisoned in a piece of faceted crystal,” said Louboutin, describing the bottle, which is intended to be displayed on a vanity.

The designer says he wanted the color to look as if it is “floating in space” inside the bottle. Rouge Louboutin’s bottle is decorated with an ombre effect, which starts with intense black and graduates to reveal the vibrant red. The other bottles in the collection are clear.

The bottle’s design was inspired by architecture. Specifically, Louboutin says he was inspired by the classical balustrades found in European buildings from the 17th and 18th centuries. (In architecture, a balustrade is a row of repeating ornamental columns or posts, which often found hold up the railing of a balcony or staircase.)


The nail polish box has a hole in the top to accommodate the long cap. Photo by DullLikeGlitter.com.

The elongated cap not only looks great, but is also designed for ease of use. The extra length helps users to apply polish more precisely. It’s weighted, for a more ergonomic feel and better balance in the hand.

The custom-designed, patented triangular brush was designed to pick up just the right amount of formula, without air bubbles. The nail polish is packaged inside a luxe black box, with a glossy red stripe revealed in the center, where the top doesn’t quite meet the bottom. It’s decorated with a finish designed to resemble patent leather, to mimic the shiny polish.

How does the elongated cap fit inside he box? The box was designed with an unusual feature – a hole in the top. The box is sold inside a white paper Christian Louboutin bag, held closed with a red ribbon. (Check out the photo, bottom right, featured on the blog, DullLikeGlitter.

Since this is the age of ‘digital beauty’, don’t look for a traditional ad campaign. News is spreading about the new collection on social media.

The most popular hashtag seems to be #LouboutinWorld, but you'll also find #BeauteLouboutin, #ChristianLouboutin and #SaksStyle promoting the collection. Fans have already been commenting on social media about the nail polish’s unique look – and the photos are generating lots of buzz. The lively conversations include comments about the silver pointy cap, such as:

"also doubles as a weapon…” posted @derekryansound on Twitter. 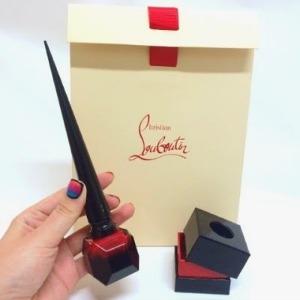 The nail polish box has a hole in the top to accommodate the long cap. Photo by DullLikeGlitter.com.
At least a few of the commenters will no doubt be shopping, as evident from these posts – which went up on Twitter minutes after the first photos appeared:

“wooo where can you get it!? Xx” said @MaxineFoley24
“What is that ladies? I want to order too! How do I do that?” posted @AngeleYu.

Instead of a traditional commercial, the team created A Rouge Louboutin film by David Lynch, which is on the brand’s website. The brand has over one million Twitter followers – and even more on Facebook, Instagram, and Tumbler combined.

According to the tale passed down by all shoe fanatics, Louboutin first had the idea to make his soles red when he used his assistant’s bottle of nail polish to paint a prototype design - and the signature red sole was born.

This was in 1992, and the first Louboutin shoe made with red soles was Pensee, influenced by Warhol and the Pop Art movement.

“The red sole was born from red nail polish. I am giving back to beauty what the shoes took from the nails many years ago,” Louboutin said.

It also makes sense for a shoe designer to think about how toenails look - and to want to coordinate them with his shoes. The word is that we can expect to see more from Christian Louboutin Beaute in 2015 - I'm hoping for lip gloss.
Related Searches