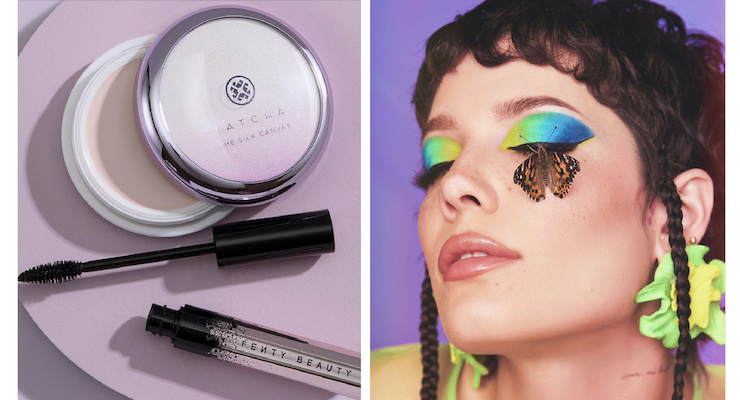 This is Ipsy's third edition of its quarterly, celebrity-curated Glam Bag X, which features seven to eight full-size products. Glam Bag X is offered to Ipsy subscribers as an upgrade and is available in limited quantities.

What's in it? One product is Fenty Beauty Full Frontal Volume, Lift & Curl Mascara in 'Cuz I’m Black.' "I love that it’s super buildable..." Halsey said. Another is Tatcha 'The Silk' Canvas Filter Finish Protective Primer, which Halsey uses to make her makeup last longer, according to Ipsy.

Halsey comments, "I've been a makeup junkie since I was a teenager, always grabbing and experimenting with whatever product I could get my hands on. So I've tried it all; drugstore to designer, neutral and natural to experimental and avant-garde. I took this mix and match approach to curating my Glam Bag X collection so I can confidently say there's something in it for everyone."


Halsey is a Self-Taught MUA & Founder of About-Face

Halsey announced her new venture with a campaign video featuring models with creative makeup looks, which Halsey did herself. Allure calls the brand an 'ode to creative expression.'

Emine ErSelcuk, senior vice president of merchandising at Ipsy, adds, "Halsey is a beauty chameleon...She is an inspirational entrepreneur and soon-to-be mom who prioritizes high-performing, multitasking products with clean ingredients—a pillar that has become increasingly important to Ipsy."

ErSelcuk continues, "She is completely aligned with our mission to make beauty more inclusive and welcoming to all. We are thrilled to deliver on that promise with so many incredible brands, including her very own, about-face."

Ipsy is a part of BFA Industries, formed after its purchase of BoxyCharm last year.

Photo of Halsey above is a screenshot via Instagram at @iamhalsey —and take a look at the video Ipsy posted below.