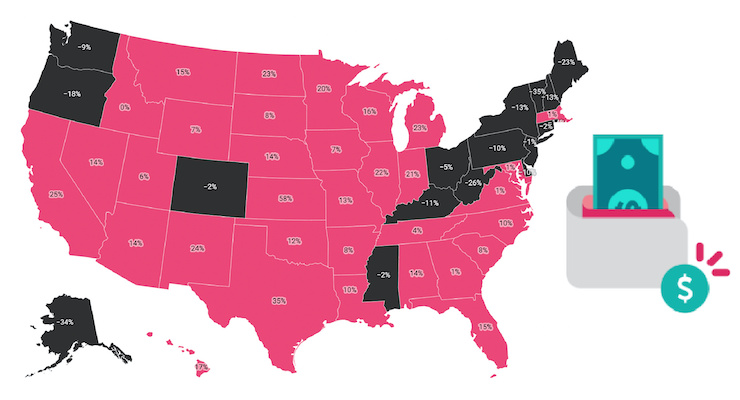 While several other reports have shown that we're all wearing—and buying—less makeup as we stay at home more, Ibotta's data is slightly different. "The Covid-19 pandemic has wreaked havoc on many industries, but makeup is not one of them," says  Bryan Leach, CEO, Ibotta. "Many states have seen a significant increase in big box store makeup purchases during the pandemic," he says.

Ibotta compared how much consumers were spending on makeup from June through December of 2020 vs. 2019. Although spending was down 5% overall when calculating the national average, some states saw as much as a 58% increase.

Washington, D.C, for example, showed an 89% increase in spending on makeup.

Which states decreased?  Vermont showed the largest decrease in spend on makeup?, with 35% less, followed by Alaska with a 34% decrease, and West Virginia, down by 26%.

Here are the rankings:

Increase in Makeup Spending By State During the Pandemic

Residents in These States Have Earned the Most Cash Back

The states where shoppers have earned the most cash back using Ibotta's app, over the past 5 years, are:
Further down the list are New York at just over $33M; New Jersey is nearly $19M; and Washington ranks in tenth place with just above $15M.


How popular is Ibotta?

In most states, approximately 15% of all adults in the state use the app, according to state population data combined with Ibotta’s data.

“This means that most states could save 6.5 times the amount of money they already save, if more people used the app,” says Leach. “For perspective, only 18% of all adults in Florida use the app—so Floridans could have saved over $400 million,” Leach explains.

Ibotta has both an app and browser extensions. Shoppers can earn cash back on both online and in-store purchases.