The YouTube star has been accused of using racist and offensive language. 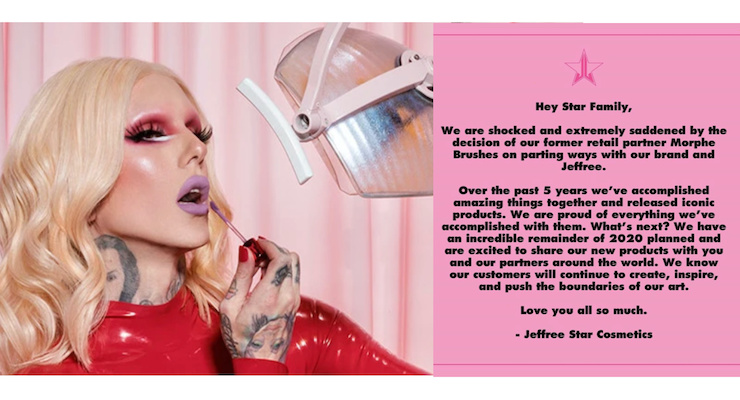 Morphe has announced it has cut ties with Jeffree Star, founder of Jeffree Star Cometics.

Starr, a makeup artist who rose to fame on YouTube (and who had a YouTube documentary, The Secret World of Jeffree Star), has recently been accused of using racist and offensive language, as well as manipulating other creators, The Verge reports.

Morphe recently stated, "Today we’ve made the decision to cease all commercial activity related to Jeffree Star and affiliated products...As we look to the future, we will continue to share updates on what lies ahead for the Morphe brand.”

Jeffree Star Cosmetics posted the above message on Instagram, which says: "We are shocked and extremely saddened by the decision of our former retail partner Morphe Brushes on parting ways with our brand and Jeffree. Over the past 5 years we've accomplished amazing things together and released iconic products. We are proud of everything we've accomplished with them..."

Need the backstory? Tati Westbrook, another YouTuber and founder of Tati Beauty, reveals more details in a video she posted last week. Teary-eyed, Westbrook explains the issues she has had with Star since their recent video collab.